Drug abuse is any type of drug or alcohol use, whether short or long term. Some individuals are under the impression that they don't fall into this category if they only use drugs and alcohol recreationally from time to time, such as on the weekends or in certain social settings, but this couldn't be further from the truth. Drug abuse even involves prescription drugs, which are abused at similar rates to illicit drugs of abuse. Because prescription drugs are thought of as "safe", individuals don't consider they are abusing them when these drugs are used other than prescribed or for recreational purposes. Nearly 40 million people aged 12 and older have abused either an illicit street drug and/or a prescription drug at some point in their lives. So drug abuse is not an isolated problem, and is one which has widespread effects and consequences.

This can get tricky, because someone who may not even think they fall into this category may be involved in drug abuse. For example, someone who thinks it is OK to recreationally abuse prescription drugs from time to time, as is often the case. Because prescription drugs are legal and prescribed often without question, they are easy to obtain and abused liberally by individuals looking for instant gratification from pain killers, sedatives or stimulants. Prescription pain killers can produce an effect when abused in high doses very similar to a heroin high for example. Prescription stimulants when abused can produce stimulant effects very similar to cocaine or other illicit stimulants when abused. Prescription drug abuse has the same consequences as any other drug abuse, and these drugs are not safe to abuse under any circumstances.

Individuals who fall into the category of drug abusers is very broad, and this can range from illicit drug abusers who abuse hardcore drugs and prescription drugs every day to individuals who only abuse drugs and alcohol on occasion. What is important to understand however is that in either case, individuals are putting themselves at risk of the very same consequences, whether they abuse heroin every day or pop an Adderall on a Saturday night. In fact, occasional abuse can be even more dangerous because abusers haven't built up a tolerance to their drug of choice. So while someone who has been abusing prescription pain pills every day for two years may be tolerant to a certain dosage, someone who only abuses opiates and prescription opioids on occasion may take the same amount and experience an overdose. These are the dangers which come with any type of drug abuse, despite how seemingly innocent and benign occasional use may seem to ignorant or careless users.

Drug abuse can affect anyone 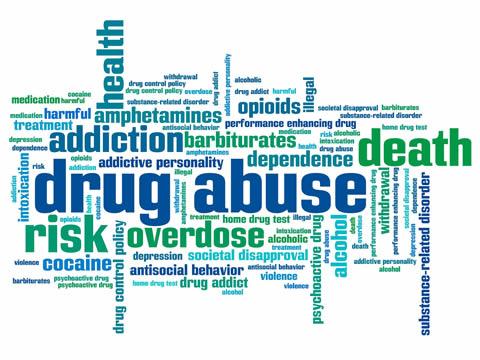 Statistics show that drug abuse is not confined to a certain strata of society, and effects individuals of all ages, races and social backgrounds. Youth become involved in drug abuse most often because of peer pressure and to become more accepted. This can begin with occasional binge drinking, and then lead to marijuana use and even prescription drug abuse in many cases. Rates of prescription drug abuse among youth have soared in recent years, and teens are stealing powerful prescription drugs right out of your medicine cabinet. Rates of prescription stimulant abuse among college students is a particular problem for example, as these drugs can help them stay up all night to cram for exams and keep up with their studies. Unfortunately, these drugs can cause dependence much like any other illicit stimulants, and can have many physical consequences and effects that recreational users are unaware of.

Adults may become involved in drug abuse for different reasons such as a temporary escape from a problem or situation in their lives. Any type of drug abuse for any reason can lead to a myriad of problems however, which often worsens the problem that the individual was attempting to escape from or numb in the first place. These consequences are often not taken into consideration until it is too late. A very real circumstance is the reality that this drug abuse can very easily turn into a full blown addiction which can spin out of control. Someone first abusing drugs may not consider that this can happen to them, and they are strong enough to be able to quit on their own. Unfortunately, once someone becomes dependent to a drug or to alcohol will-power alone isn't enough to help them stop. This can happen overnight, with someone who just wanted a temporary release experiencing a problem that could have devastating consequences in their life. Many drugs are so addictive, that someone can become addicted even after short term use. There are many examples of someone using heroin, cocaine or methamphetamine just ONCE and becoming hooked.

Choosing the right treatment program that is appropriate to your specific needs is vital to your recovery.

We can help you find treatment options/locations based on your specific needs and situation. Call us now! 1-888-794-0381 or email to speak with an addiction treatment counselor.

The many dangers and the reality of addiction are often not considered when abusing drugs and alcohol. And when these realities are realized, it can seem like it's too late to do anything about it. The powerful hold that drugs can take on an individual can seem unbreakable, and individuals even with the best intentions to quit can have no luck doing so on their own. When it gets to this point, the only solution is treatment. Because many individuals are in denial that they even have a drug problem, they can postpone getting help and this then causes distress for their friends and family who see the signs and have to experience the consequences of their drugs abuse. Many times, intervention is needed and only then can an individual realize how drug abuse is affecting their lives and loved ones and that they need to do something about it.

Drug abuse is an evasive and insidious problem in our culture, but one which must be realized and dealt with effectively so that individuals can spare themselves from the life-altering consequences of such abuse. No drug abuse is safe or benign, no matter how cool it seems or acceptable it is by society or one's peers, and it is important to seek help when such a problem exists.