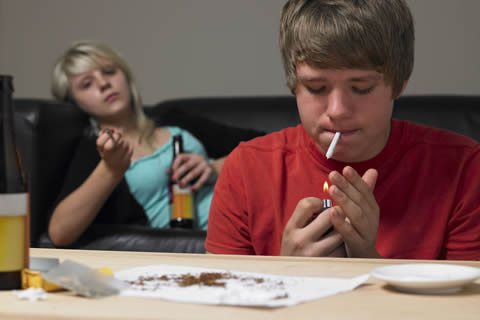 Teen drug abuse has become an epidemic in the U.S. over the past decade. According to several recent government sponsored surveys, teenage substance abuse has escalated by almost one-third; additionally, one out of every ten high school students in the United State have reported using a recreational drug within the last year on at least one occasion. Many substance abuse experts believe that the primary reason for the current teen drug abuse epidemic is because of a lack of parental supervision and involvement; in the current economic downturn, many parents have had to take on an extra job, just so that they can effectively make ends meet. To add insult to injury, over the past several years, government sponsored anti-drug programs have virtually become non-existent, due to numerous budget cuts; thus, the large majority of teenagers have not been educated about the dangers of drugs, which can put them at a much higher risk for making bad choices .

Teen drug abuse starts in the adolescent's home, as teens are commonly influenced by the behaviors of their parents; thus, many teenagers that have grown up with parents who drink heavily on a regular basis will also suffer from alcoholism, at a later period in their lives. Adolescents may begin to experiment with drugs or alcohol in an effort to escape from the everyday pressures of their lives. Other factors that are related to the high incidence of teen drug abuse includes peer pressure, family conflicts, emotional instability, thrill seeking, and poor impulse control.

If you or someone you are close to is dealing with a drug or alcohol abuse problems, we can help! Call 1-888-794-0381 or email to speak with an addiction counselor who can answer your questions and help you find treatment programs best suited to your situation.

This is a free service. 100% confidential.

Teen drug abuse can only be counteracted by educating parents, coaches, teachers, school counselors and clergymen about the most common drugs that teenagers are currently using; these can include marijuana, inhalants, ecstasy, GHB, methamphetamine, cocaine and heroin. Unfortunately, many of the new designer drugs are increasing in popularity; this includes a synthetic form of marijuana that is called K2, which can be purchased at many corner convenient stores across the U.S. These designer drugs are sometimes cheaper than some of the illicit drugs that they are modeled after. Teen drug rehabs across the United States are currently treating huge numbers of adolescents who have become addicted to designer drugs.

Teen drug abuse can only be dealt with effectively when parents become educated about what to do if they suspect that their child is using drugs.

Thoroughly check your teenager's bedroom, in the event that you suspect teen drug abuse problems. Parents should be aware of where to look, when going through a teen's room to check for drugs; potential hiding places could include, looking under mattresses, or checking the underside of any dresser drawer. Teenagers may also hide drugs and related paraphernalia in the pockets of old clothes that they no longer wear.

If a parent suspects teen drug abuse, they should take a close look at their child upon returning home after a night out with friends.

Teenagers who have been drinking or using drugs will often try to avoid any form of interaction with their parents; they often will accomplish this by putting a mint or gum into their mouths, wearing a baseball cap and pulling it down over their eyes, or by using eye drops in an effort to make sure that their eyes do not appear to be bloodshot. If your teenager comes in at night and tries to avoid conversations and is uncomfortable about you looking them in the eye, this is a serious red flag that could be indicative of teen drug abuse.

Lock your liquor cabinet and make sure that your teenager does not have access to any of your prescription medications, if you suspect teen drug abuse.

In a government conducted study in which teenagers who were struggling with substance abuse problems were asked how their drug or alcohol use began, over half of them said that they got high for the first time in the comfort of their homes; the two most common ways that the teens accomplished this, were reported to be by taking their parent's prescription medications or by raiding the family liquor cabinet. Many of the adolescents said that they chose to drink bottles of alcohol that were clear liquids, such as rum or vodka, as these could easily be replaced by putting water in the liquor bottle.

If you suspect teen drug abuse, it is vital that you get to know who your teenager is hanging out with. When a teen is reluctant about their parents meeting their friends, this is a major red flag that they have something to hide. Ask them to have their peers over to the house so that you can get to know them; if they refuse to even consider this or if they become defensive, they could be hanging out with teenagers who abuse drugs.

If you suspect teen drug abuse, be sure to speak to your child's school counselor.

Teenagers who use drugs are generally notorious for being late for school, missing classes, or just skipping school altogether in order to hang out and use drugs. A counselor can sit down with you and look at your child's school records and class attendance history; doing this is one of the easiest ways that a parent can begin to get a clear picture in relation to what their child is doing with their time, and to find out if they are getting to school every day.

By far, the most dangerous thing about teen drug abuse is that adolescents often believe that they are invincible; believing this could cause a teenager to take enormous risks, in relation to their drug use. For this reason, it is important that when a parent has discovered that their teen is abusing drugs, they should have a sense of urgency about reaching out for the assistance of a quality drug rehab program. The best type of teen drug abuse treatment is recovery care that can address the unique needs of the adolescent that is struggling with substance abuse issues.